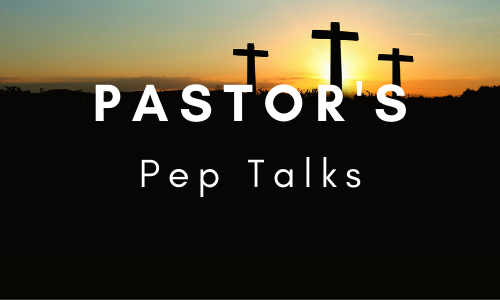 Most organisations, institutions, teams and causes have a symbol or logo that they hope will become recognisable. Everyone knows the four rings of Audi, the multicoloured ‘G’ for Google or the intersecting red and yellow circles of Mastercard. The ‘Cross’ is the symbol of the Christian faith, known the world over. Sometimes it is worn merely as jewellery and no-one bats an eyelid, but at other times its appearance provokes strong reactions. In the last of our Lent series of Pep Talks from Mark’s Gospel, we’re going to focus on the Cross and what it achieved. When reading the biography of a famous person, if they are deceased, the events of their death will probably occupy just a few words. What the biographer wants the reader to grasp is the impact of the person’s life. But when it comes to Jesus, Mark devotes a third of his gospel (chapters 11-16) to the events of his last week leading up to his death. That’s telling us loud and clear that the Cross of Christ is of massive importance to us.

“At the sixth hour darkness came over the whole land until the ninth hour.” Darkness throughout the bible is a metaphor for evil, ignorance and death, in contrast to ‘light’ which represents goodness, truth and life. In both Isaiah (13:9-10) and Jeremiah (15:9) darkness in the daytime symbolised God’s wrath. The darkness that Mark describes occurred between noon and mid-afternoon. The penultimate plague that God sent on Egypt back in Exodus was darkness as his judgment on the nation’s wickedness, so this darkness is telling us that man is doing a terrible thing in executing God’s Son.

“And at the ninth hour Jesus cried out in a loud voice, “Eloi, Eloi, lama sabachthani?”- which means, “My God, my God, why have you forsaken me?” (v34) This comes straight from Psalm 22:1, a psalm peppered with prophecies about the Cross. Although man is doing a thoroughly wicked thing, the cry of Jesus is shocking in that he is the one who is being forsaken by God. The wrath of God that should have fallen on mankind, is actually being taken by Jesus. The crowd misunderstand Jesus’ cry as a cry for help and try to keep him alive by offering him the wine, itself a fulfilment of Psalm 69:21. “With a loud cry, Jesus breathed his last.” (v37) A person being crucified would eventually die because they’d be unable to breath, but Jesus lets out a loud cry, for which a lot of breath would have been required. And then “he breathed his last”. This is telling us that Jesus gave up his life, he did not have it taken from him. Here is the one who would “give his life as a ransom for many.” (10:45)

If this were a film, at the point of Jesus’ death on the Cross, the camera would immediately pan from Golgotha across the City to the Jewish Temple where- “The curtain in the temple was torn in two from top to bottom.” (v38) This was not your average drape but around sixty feet high, thirty feet wide and the span of a hand deep. It separated the Holy Place from the Most Holy Place. This was where God would presence himself by way of a cloud over the Ark of the Covenant. It was the most sacred place where only the High Priest, once a year could enter, and only then with the sacrificial blood of a pure animal. The curtain represented a gigantic ‘No-Entry’ to sinful worshippers from a holy God. Here’s the great news- the sinless Son of Man has been banished so that sinful people like us could be welcomed. Through the atoning work of Jesus for our sin we now have direct access to God.

“And when the centurion, who stood there in front of Jesus, heard his cry and saw how he died, he said, “Surely this man was the Son of God.” (v39) Whether the Centurion knew exactly what he was declaring, his words are a fitting climax to the Cross. Jesus has been shown to be God by his moment of greatest humiliation- his death! Also, until his death, the Jews were blind to who Jesus was, but when he dies, it is a Gentile who sees him clearly! Mark began by telling us- “The beginning of the gospel (good news) about Jesus Christ, the Son of God.” (1:1) and at the end it is a total outsider, who declares- “Surely this man was the Son of God.” This is of crucial importance to us because Mark is telling us that Jesus is not merely a great teacher, a moral example, a worker of miracles or a religious mover and shaker, but the Son of God.

Then finally, Mark tells us who was standing at the Cross at the end. It certainly wasn’t him because he’s reckoned to have been the young man who scarpered naked after Jesus’ arrest (14:52). It was a bunch of women who’d followed Jesus in Galilee, caring for his needs and several more who’d joined in Jerusalem. It is some of the same women who see where Jesus’ body is laid(15:47) and it is the same women who encounter the empty tomb and receive the news from the angel- “You are looking for Jesus the Nazarene, who was crucified. He has risen!” (16:6). This is not unusual to our 21stC ears, but in a 1stC world where a woman’s testimony was inadmissible in a court of law because it was deemed unreliable, to have women as primary witnesses is astonishing. If you were making all this stuff up, then this is an embarrassing error. But here’s the thing, he’s not making it up, it’s true. And it is to these women that the task of declaring the resurrection is entrusted- “But go, tell his disciples and Peter, ‘He is going ahead of you into Galilee. There you will see him, just as he told you.” (16:7)

So what did the Cross achieve?

“For God was pleased to have all his fulness dwell in him (His Son), and through him to reconcile to himself all things, whether things on earth or things in heaven, by making peace through His blood, shed on the cross.” (Colossians 1:19-20) All that remains is for you to receive God’s peace by putting your faith in His Son! Amen