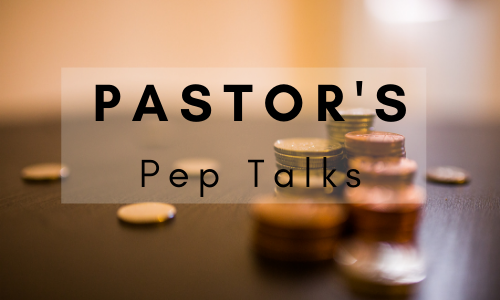 At the youth group this week in our Ice-Breaker Quiz was this question- The richest 26 people in the world have the equivalent wealth of the poorest ‘what’ percentage of the world’s population? a) 20% b) 30% c) 40% d) 50%. What would be your guess? Well the answer is- d) 50%. So 26 people have the same wealth as 3.9 billion people. That’s the combined populations of the seven largest countries (China, India, USA, Indonesia, Brazil, Pakistan, Nigeria). That fact alone tells you that something is seriously warped about our world when it comes to money. But money is something that we all need in life. It’s better to have money than not have it. Undoubtedly there’s much good that can be done by the wise deployment of money. There are some rich people in the Bible who love God, like Solomon, Abraham and Job, and so God is not anti-money or anti-wealth. The scriptures encourage us to work for which we receive money and discourages laziness. All that said, there are many warnings in the Bible about the affect that money can have upon us and Ecclesiastes zooms in on several.

“Whoever loves money never has money enough; whoever loves wealth is never satisfied with his income. This too is meaningless.” (v10) The wealthy US Oil Baron John D Rockefeller was once asked ‘How much money is enough?’ To which he replied, ‘Just a little bit more!’ That’s the problem isn’t it- Just a little bit more- and then I’ll be satisfied! But God says, no you won’t! Paul says this to Timothy, which is often misquoted- “For the love of money is a root of all kinds of evil.” (1 Tim 6:10) It’s not the money or wealth that is the problem but the fact that we love it and we have made it the ultimate thing in our lives. It controls our hearts and affections. It has become a god, and the living and true God, who does satisfy, is out of the picture.

Others will happily spend your money

“As goods increase, so do those who consume them. And what benefit are they to the owner except to feast his eyes on them?” (v11) We’ve probably all read the Parable of the Lost Son that Jesus tells in Luke 15. The younger son asked his father for his share of the inheritance and then went off to distant country and squandered his wealth in wild living. He spent it all, was totally broke, and no-one helped him out. I dare say that, like bees around honey, there would have been plenty of people helping him spend his fortune, but once the money had run-out, they’d move on to the next sucker. The miserable history of big lottery winners and the entourage surrounding overpaid professional football players tells us that this is exactly what happens in life.

“The sleep of a labourer is sweet, whether he eats little or much, but the abundance of a rich man permits him no sleep.” (v12) A good night’s sleep is such a blessing isn’t it? Ask any new parents!! Well the ordinary labourer does enjoy a good night’s sleep, whether he’s gone to bed with a full tummy or an empty one. But not so the rich man. Whether it is his lavish lifestyle and overeating, or the fact that with increased wealth comes increased worry, he gets no sleep at all. Basically, the more that you have the more you potentially have to worry about. The rich man will be robbed of one of the most basic necessities that the human body needs, because his mind will be going over and over all those scenarios and what ifs concerning all his stuff. Sad but true!

Wealth can easily be lost

“I have seen a grievous evil under the sun: wealth hoarded to the harm of its owner, or wealth lost through some misfortune, so that when he has a son there is nothing left for him.” (v13-14) It may a stock market crash, a dodgy investment, an unwise choice of business partner, a pandemic or multiple other unforeseen risks, and a fortune can be lost overnight. The few businesses that have flourished as a result of the pandemic are massively outnumbered by the countless businesses that have gone down the plughole and with them the wealth of the owners. Few saw that coming!

You can’t take it with you

“Naked a man comes from his mother’s womb, and as he comes, so he departs. He takes nothing from his labour that he can carry in his hand. This too is a grievous evil: As a man comes, so he departs, and what does he gain, since he toils for the wind? All his days he eats in darkness, with great frustration, affliction and anger.” (v15-17) I heard Billy Graham say, “You’ll never see a U-Haul truck behind a hearse!” The huge crowd laughed but the point he was making is ignored by most people. Whatever we amass in life stays here. This is the Parable of the Rich Fool in Luke 12. The man decided he had plenty of good things laid up for many years and decided to take life easy; eat, drink and be merry. Sounds great. Then God said to him- “You fool! This very night your life will be demanded from you. (he’ll die) Then who will get what you have prepared for yourself?” (v20) The answer- Not him! You can’t take it with you.

So what ‘s the answer?

“Then I realised that it is good and proper for a man to eat and drink, and to find satisfaction in his toilsome labour under the sun during the few days of life God has given him– for this is his lot. Moreover, when God gives any man wealth and possessions, and enables him to enjoy them, to accept his lot and be happy in his work- this is a gift of God. He seldom reflects on the days of this life, because God keeps him occupied with gladness of heart.” (v18-20) Whether we’re rich or poor, have a lot of stuff or not much, a big house or a tiny flat, an exciting job or something more mundane, the key to handling money, wealth and work rightly, is to see it all coming from the hand of God. Keep your eyes fixed on Him, your provider, with thanksgiving and these other things in life will keep their rightful place. Take your eyes off him and begin to make these other things your god, and any or all of the above may happen.