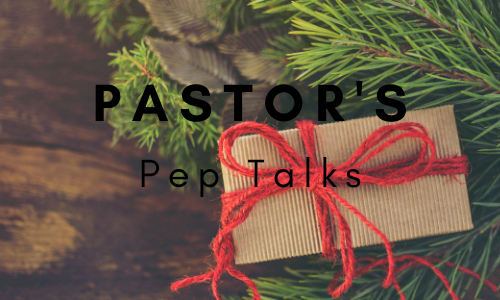 At the heart of Christmas is the giving and receiving of presents. Some people love it and others loathe it. Some people spend hours carefully thinking about what loved ones would like whilst others barely give it a second thought. Some have their Christmas lists compiled in October and others rush around the shops on Christmas Eve in a panic looking for something, anything, to buy! The sudden shift to Tier 4 and closure of non-essential shops has thrown many of our lastminute present-buying plans into a total spin (aaghh!). A Christmas gift needs to be appropriate for the person receiving it, hence, we wouldn’t give a grandparent a set of lego or a toddler a bottle of Scotch. We’ve probably all got funny tales of Christmas gifts that really didn’t go down well. However, it is a wonderful feeling when the gift you’ve given someone is just right. As we’ll open our Christmas presents later this week, I thought that this Pep Talk should focus on the gifts the Magi from the east brought Jesus. “On coming to the house, they saw the child with his mother Mary, and they bowed down and worshipped him. Then they opened their treasures and presented him with gifts of gold and of incense and of myrrh.” (Matthew 2:11) These look a rather odd set of gifts for a toddler, but we’ll see how appropriate they were for Jesus.

In uncertain economic times, gold is often the investment that flourishes, as investors see it as a safe haven. That has certainly been the case throughout the turmoil caused by Covid, hitting an all-time high of almost $2100 an ounce earlier this year. In presenting Jesus with a gift of gold, the wise men from the east weren’t giving Jesus a secure investment. When the Queen of Sheba heard about King Solomon’s wisdom she paid him a visit, armed with many gifts, not least “large quantities of gold” (1 Kings 10:2). You see, gold is what you give to a king. So this first gift is telling us that royalty has arrived. Jesus may only be a very young child but he is God’s promised King, or Messiah, who’s come to lead God’s people. When the Magi arrived in Jerusalem they asked, “where is the one who has been born king of the Jews?” (2:2). When the angel appeared to the shepherds he said- “Today in the town of David a Saviour has been born to you; He is Christ (Messiah) the Lord.” (Luke 2:11) Jesus would not be like any king before or since, as his kingdom would be eternal and global, as Micah declared- “He will stand and shepherd his flock in the strength of the LORD, in the majesty of the name of the Lord his God. And they will live securely, for then his greatness will reach to the ends of the earth. And he will be their peace.” (5:4-5) Gold as a gift was perfect.

People often give ‘smellies’ for Christmas because not only is it a gift that lasts for most of the year but it’s also great to smell nice. But decent ‘smellies’ aren’t cheap and frankincense wasn’t cheap either. It was extracted from the bark of Boswellia trees found in semi-desert regions of NE Africa, S Arabia and NW India. It was also very smelly. Why did the Magi bring Jesus frankincense? There are two sides to this. Firstly, incense was burned in praise of God. The Lord says- “My name will be great among the nations, from the rising to the setting of the sun. In every place incense and pure offerings will be brought to my name, because my name will be great among the nations,” says the LORD Almighty.” (Malachi 1:11) In giving Jesus frankincense the Magi were acknowledging that Jesus is God. As John memorably puts it, “No-one has ever seen God, but God the One and Only, who is at the Father’s side, has made him known.” (1:18) Of all the religions of the world, this truth is unique to Christianity. Secondly, in giving Jesus frankincense, it pointed forward to Jesus’ ministry for us. In the Temple only the priests were permitted to burn incense as a part of their role as mediator between God and His people. That function is now perfectly fulfilled by Jesus- “Now there have been many of those priests, since death prevented them from continuing in office; but because Jesus lives for ever, he has a permanent priesthood. Therefore he is able to save completely those who come to God through him, because he always lives to intercede for them.” (Heb 7:23-25) Whether it was a mark of his deity or his priestly service or both doesn’t matter. The gift was spot on!

Some gifts aren’t fully appreciated at the time they are given, but only later is their true worth felt. If the family were to buy me a new gas-fired BBQ for Christmas, I probably wouldn’t use it for a while but come the summer I’d be all over it. In giving Jesus myrrh, the Magi were pointing forward to His death. Myrrh was mixed with wine and offered to Jesus on the Cross (Mark 15:23) and Nicodemus brought a mixture of myrrh and aloes to anoint Jesus’ body before it was placed in the tomb (John 19:39). This sounds a bit morbid doesn’t it? It would be like giving a relative a voucher for the local funeral directors as a Christmas gift. However, the gift of myrrh makes total sense because it points to the very reason God’s King came to this world. He has come to reconcile God with man because our rebellion is a barrier that separates us from God. And Jesus would achieve this through his blood shed on the cross. As the angel declared to Joseph- “She (Mary) will give birth to a son, and you are to give him the name Jesus, because he will save his people from their sins.” (Matthew 1:21) And the proof that Jesus’ death was a sufficient sacrifice for our sin, was that God raised his Son to life again three days later. Like the gold and frankincense, myrrh was spot on!

What should my response be to the fact that Jesus is God’s gift to me & that through repentance and faith in him I’m not only reconciled to God but also receive the gift of eternal life? Praise!!!! “Through Jesus, therefore, let us continually offer to God a sacrifice of praise- the fruit of lips that confess his name.” (Heb 13:15)