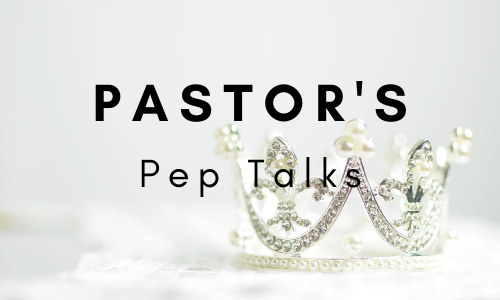 I, like many of you, am enjoying season 4 of ‘The Crown’ on Netflix and we’re up to the point of Charles and Diana getting married in 1981. Even allowing for the fact that the drama is a fictional portrayal of the Royal Family (as one journalist this week insisted people be reminded of) you can’t miss the fact that behind all the pomp and ceremony there is a great deal of messiness. Truth be known, isn’t that the case for most families? If we were to trawl back through ancestry.com we’d all find relatives that did bizarre things and scandal that brought shame to the family. As we begin the New Testament we’re confronted by a long list of names that represent the family line of Jesus, starting from Abraham. In a patriarchal society it is no surprise to discover that the focus is on fathers and there are plenty of men and Kings in Jesus’ genealogy who got up to some very dodgy stuff and some who were outright wicked. But this week’s Pep Talk, is going to focus on the five women who get a mention.

Genesis chapter 38 has the story of Tamar and her father in law Judah, one of the twelve sons of Jacob. Judah married a Canaanite woman who bore him three sons, the oldest of which married Tamar. Both the older sons died, due to their wickedness, without having children and Judah promised Tamar to his third son to carry on the family line, but didn’t follow through with the promise. So Tamar had a cunning plan of revenge. She found out where Judah would be visiting and dressed as a shrine prostitute and lured Judah into having sex with her. Judah didn’t know that it was his daughter-in-law and his actions were embarrassingly exposed. Tamar gets pregnant and gives birth to twins, Perez and Zerah. It’s a very sordid episode indeed, but the family line of Perez gets a mention in Ruth 4:18-22 as leading to King David.

Joshua chapter 2 tells the story of how a prostitute called Rahab secretly hid two Israelite spies who were on a reconnaissance mission in Jericho. The King’s soldiers couldn’t find them because of her courage. Before the soldiers leave, Rahab, a foreigner, said how fearful her people were of Israel’s God. And yet, James in his letter, says of Rahab that she was “considered righteous” for what she did in hiding the spies as another example, with Abraham, of “faith without deeds is dead”. (2:26) Rahab marries Salmon and gives birth to Boaz, the great grandfather of King David.

Like Tamar and Rahab, Ruth was also a foreigner, a Moabite. She had married Elimelech and Naomi’s son Mahlon, after they’d fled from Judah to Moab because of a famine in the land. However, Elimelech and both his sons died and Naomi decides to return to Judah and Ruth courageously goes with her. This was a loving and bold move on her part as her prospects were not good- a widow, a foreigner and so far unable to bear children. However, like Rahab, she had put her faith in Israel’s God and the Lord rewards her for her acts of sacrificial kindness towards her mother-in-law. An Israelite called Boaz would act as kinsman-redeemer and marry Ruth and she would give birth to Obed, who would be the grandfather of King David.

And then we get to King David. He should have been off to war with his army, but instead stayed in Jerusalem (2 Samuel 11). And then one evening from his rooftop he spotted a beautiful woman bathing and made enquiries about her and was told that she was Bathsheba, the daughter of Eliam and married to Uriah the Hittite. Well that wasn’t going stop the King as he sent for her, had sex with her and she too, just like Tamar, became pregnant. The King tried to cover his tracks by calling Uriah back from the army in the hope that he’d sleep with his wife, but this plot failed because of Uriah’s loyalty to his God, his country and fellow soldiers. Then the King got Uriah deliberately sent to the front-line where he would be killed. Bathsheba became King David’s wife but his child she was carrying died. She would however a short time later give birth to a son, Solomon who would succeed David as Israel’s King.

Finally we come to Mary. She was a virgin, probably in her teens, pledged to be married to Joseph. However, before they married she was found to be pregnant. Times were very different in first century Palestine and children born out of wedlock brought great shame on the family. So Joseph was minded to divorce her quietly, so she would avoid the public disgrace (Matt 1:19). But God had other plans- “Joseph son of David (yet another link in the Royal chain), do not be afraid to take Mary home as your wife, because what is conceived in her is from the Holy Spirit. She will give birth to a son, and you are to give him the name Jesus, because he will save his people from their sins.” (Matt 1:20-21) Familiar verses to lead us into this Christmas season!

Given that in a patriarchal society the focus is on the father, there would be no need for Matthew to mention any women at all in the genealogy. Don’t you find it strange therefore, the women that do get a mention? For an Israelite crowd, the fact that the first three were foreigners would go against the grain. In addition, two were involved in sordid sexual encounters and another was a prostitute. As I said, families can be messy, and Royal Families really messy. But isn’t this a wonderful backdrop to why God came to this earth in his Son. Jesus didn’t come to bless moral people who have it all together but to save sinners who realise that they’ve messed up. As Paul tells the Corinthians- “Brothers, think of what you were when you were called. Not many of you were wise by human standards; not many were influential; not many were of noble birth. But God chose the foolish things if the world to shame the wise; God chose the weak things of the world to shame the strong. He chose the lowly things of this world and the despised things- and the things that are not- to nullify the things that are, so that no-one may boast before him.” (1 Cor 1:26-29) The Royal line that matters isn’t the great and the good but the lowly and the sinners!