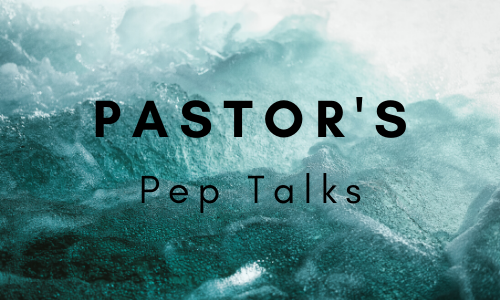 When I wrote the first of these Pastor Pep Talks on the 19th March I did not expect to be still writing them four months later. Indeed, the first Pep Talk was simply designed to be an encouragement to folk at our church as the lockdown loomed and Sunday services and our small groups were about to go online. This week we turn to Joshua chapter 1 and it is a chapter peppered by these four words- Be strong and courageous (v6,7,9,18). It is this command that inspired the children’s chorus, ‘Be bold, be strong, for the Lord your God is with you’. Whether we’ve been a follower of Christ for 5 or 50 years, or would not yet identify as one, there is much to learn from this chapter.

Succeeding a giant of a leader whether it be a monarch like Queen Elizabeth II, a manager like Sir Alex Ferguson, or a business mogul like Steve Jobs, is a tough assignment, and that’s what Joshua faced. “Moses my servant is dead” (v2). The man who had dominated the spiritual landscape of God’s people for the previous generation has died, and now the baton is being passed to “Joshua, son of Nun, Moses’ assistant.” He may have felt daunted by the task and the people may have thought, “Joshua who?” In our celebrity-obsessed culture where individuals are worshipped for their talents and achievements it’s easy for the church to look to gifted and charismatic leaders for success. So what God says in v2 was important not only for Joshua and Israel to hear but us too. “Now then, you and all these people, get ready to cross the Jordan River into the land I am about to give them- to the Israelites.” (v2) It is the LORD who would give them the Land. What they had to do was act upon that promise. Similarly, salvation is a gift from God by His grace. What we must do is act upon that promise by putting our faith in Christ and keep looking to Him.

As the LORD commissions his servant he fleshes out the promise of v2 in three ways. Firstly, in v3-4 he shows him the extent of the land that he is giving his people. One writer puts it like this- “In terms of current political boundaries, the Promised Land would cover modern Israel, the whole of Jordan, a large part of Saudi Arabia, half of Iraq, the whole of Lebanon, part of Syria and all of Kuwiat.” (David Oginde). It’s huge! Secondly, in v5a he promises to overcome all their enemies. Finally, in v5b he promises to be with Joshua. Never will he let him down and never will he let him go. How do these promises measure up to what is ours in Christ today? Well we do not look to an earthly inheritance but to a heavenly one and we’re told that we have “every spiritual blessing in Christ” (Ephesians 1:3). As for victory, whilst there are many enemies (trouble, hardship, persecution, famine, nakedness, danger, sword) but we are promised that “In all these things we are more than conquerors through him who loved us.” (Romans 8:37). And as for the promise of His presence, Christ’s final words to his disciples cannot be heard too often- “And surely I am with you always to the end of the age.” (Matt 28:20) What privileges we have in Christ!

Three times God commands Joshua to “be strong and courageous” (v6,7,9) and even his own people say the same words to him in v18. This is a memorable command and surely every parent has issued a similar command to their children when faced with a daunting task. But fortunately, whenever the bible tells us to do something it also tells us how to do it. And God does that in v7-8 with Joshua- “Be careful to obey all the law my servant Moses gave you; do not turn from it to the right or to the left, that you may be successful wherever you go. Do not let this Book of the Law depart from your mouth; meditate on it day and night, so that you may be careful to so everything written in it. Then you will be prosperous and courageous.” The strength and courage that God commands Joshua to display are directly dependent upon his careful obedience to the Word of God. And the same is true for us. If we want to know God’s promises in practice and experience their growing potential in our lives, we must obey God’s commands. The promises of God are unconditional but our enjoyment of them is conditional upon our obedience. As the hymn goes, ‘Trust and obey! For there’s no other way; to be happy in Jesus, but to trust and obey!’

The first sign of Joshua’s faith and obedience appears as he faithfully relays God’s word to the people through the tribal leaders. Joshua would not have known at this point all the details as to how God was going to lead them into the Promised Land, but all he needed to know and trust was that he would! The chapter ends with the people affirming their commitment to Joshua as their new leader. “Just as we fully obeyed Moses, so we will obey you.” This must have been music to his ears! We do not know what each day will bring but we can be sure that in Christ our eternal future is secure, nothing can rob us of that victory and he is with us by his Spirit always.