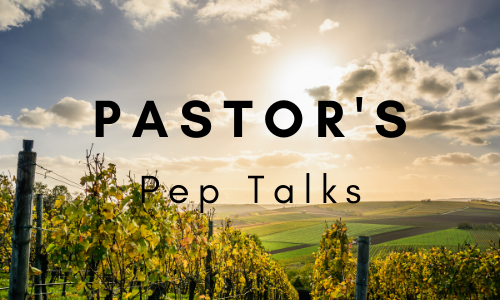 “I hope we come out of this differently as a society.” This was just one of many similar statements I’m hearing more and more. This was from someone who doesn’t profess any faith in God, but plenty of believers have expressed similar hopes- ‘we’ll be less busy’, ‘more appreciative of loved ones’, ‘savour our freedom’, ‘be thankful for the simple pleasures of life’. If it takes a global pandemic to reawaken a thankful spirit instead of a sense of entitlement then that’ll be good. But God wants us to discover something more important than this as this passage from Luke 13 shows. Jesus has been teaching vast crowds (12:1) but then says this to them- “How is it that you don’t know how to interpret this present time?” (12:56) He might level it at us today too!

Some in the crowd informed Jesus of a particularly ghastly end that some worshippers had come to when the Roman Governor Pilate had massacred them during one of their festivals. Jesus answered- “Do you think that these Galileans were worse sinners than all the other Galileans because they suffered this way?”. The commonly held belief was that you reap what you sow. If you come to such a grim end, then it must be because of particular sin in your life. This was the same accusation that Job’s friends levelled at him and it also lay behind the disciples question of Jesus in John 9:2- “Rabbi, who sinned, this man or his parents, that he was born blind?” But Jesus is emphatic- “I tell you, no!” There is no straight line to draw between their suffering and sin. Don’t even go there. “But unless you repent, you too will perish.” Jesus then gives another example, this time of eighteen people who tragically died when the tower of Siloam fell on them. Once again, he pre-empts their assumption- “do you think they were more guilty than all the others living in Jerusalem?” Did these seemingly innocent people get crushed because of some sinister stuff in their lives? Jesus is emphatic- “I tell you, no! But unless you repent, you too will all perish.” By that, he doesn’t mean that his hearers would also come to a gruesome death like the Galileans or a tragic death like the eighteen, but unless they repented, they’d encounter a terminal fate that has even greater consequences.

The Opportunity will End

Jesus then tells a parable. A man planted a fig-tree in a vineyard, but it failed to produce any fruit for three years. So he told the man who looked after his vineyard to cut it down. But the vinedresser made an appeal- “Leave it alone for one more year, and I’ll dig round it and fertilise it. If it bears fruit next year, fine! If not, then cut it down.” The fig-tree has a year to produce fruit. The clock is ticking. One of the things I love about going to the cinema are the trailers before the main film. The purpose of the trailer is to alert you to a film coming in the future so you’ll be ready for it when it comes. In a similar way, events like the massacre of the Galileans, the crushing of the eighteen, the 9/11 terrorist attacks, and the Coronavirus pandemic, are like film trailers alerting us to a greater judgment to come. We of course don’t know when it will be, but every time one of these tragedies occur, it is a reminder from God that the clock is ticking. He knows when the Day of Judgment will be as Paul made clear- “For He has set a day when he will judge the world with justice by the man he has appointed. He has given proof of this to all men by raising him from the dead.” (Acts 17:31) The Risen Jesus is the Judge before whom every one of us will one day appear.

Now is the Day of Salvation

There’s another aspect to the owner of the vineyard that would be easy to miss. He could have insisted on the barren fig-tree being cut down there and then, but he didn’t. Instead he displayed patience, giving it another year. In a similar way, God does not treat us as our sins deserve here and now but gives us the opportunity to repent. He is merciful. That is why Peter writes what he does in his second letter-“He is patient with you, not wanting anyone to perish, but everyone to come to repentance.” (3:9) The most pressing need that all of us face, whether we know it or not, is to have our sins forgiven and be reconciled in relationship to God. This only comes through repentance and faith in the one who achieved it- the Lord Jesus. “But now he has reconciled you by Christ’s physical body through death to present you holy in his sight, without blemish and free from accusation.” (Colossians 1:22) To ignore Jesus’ warning is to bear the consequences for our sin ourselves at the Judgment to come and the eternity in Hell that follows. But to heed Jesus’ warning and turn in faith to Him is to be forgiven our sins now and reconciled with God forever.

-There may be lessons you’re learning through the Lockdown and resolutions that you’ve made, but the most vital response is to put your trust in the Lord Jesus. He will not only give your life meaning now, like you’ve never known, but change eternity.

-For those of us who have put our trust in Jesus, may the message of Luke 13 spur us into more fervent prayer for and courageous witness to those who don’t know Christ.

Dear Lord God, although these are painful times that we are facing may we not turn our backs on you. Please help us to see that it is a severe mercy on your part in that you want us to turn to you in faith. Thank you that in Christ you have provided for our forgiveness and made peace with us. May we grow in our love for you Lord Jesus and our desire to make you known. This we ask in your name. Amen