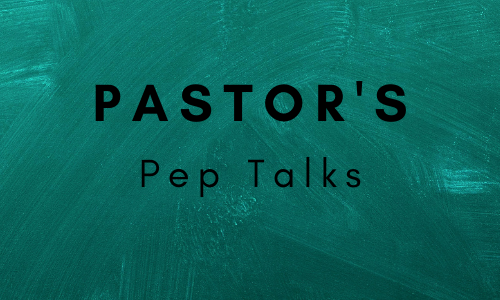 On the 25th June 2017 I preached on this text for the first time. I knew ‘in theory’ the fact that outwardly we’re wasting away, but in practice, I’d enjoyed good health, was reasonably fit and all was good, or so I thought? However, the following Wednesday after experiencing unusual chest pains and shortness of breath, I was admitted to hospital and later underwent heart surgery. I then knew at a far deeper level the reality that my body is an earthly tent (ouch!). As I write this Pep Talk, I’m aware of a neighbour close to death, several friends looking after aged parents with dementia, many people (young and old) facing mental health issues, fellow Christians fighting cancer and other serious medical conditions, and all of us creaking that bit more as each year passes. Most of us reading this know we’re not bullet proof! However, our bodily decay shouldn’t be the source of grumbling but the springboard to hope. The ‘Carry On’ films are not very woke and will get the cancel culture treatment soon if they haven’t already, but as followers of Christ, we are to Carry On Camping in these earthly tents, for now, until we make the permanent move to our heavenly home.

“Now we know that if the earthly tent we live in is destroyed, we have a building from God, an eternal house in heaven, not built by human hands.” (v1) This follows on from Paul having just told his readers that “outwardly we are wasting away” (4:16). Tents are temporary structures used until a more permanent home can be found. Similarly, our bodies are temporary structures, designed only for earthly use. In v4 Paul describes our bodies as mortal, and therefore subject to decay and increasing frailty. But this earthly tent will one day be replaced by a permanent structure from God. But note that Paul says that “we have” this eternal dwelling, not that we will have it, such is the certainty of the Christian.  This is our resurrection body, as v4 states; “what is mortal may be swallowed up by life.” How can we be confident of this? Well, Christ’s resurrection is the firstfruits (1 Cor 15:20), assuring those who’ve put their trust in him, of their own resurrection. What effect will this have on us today? It will make us long for the glorious future God speaks of. Let’s look at v2-4; “Meanwhile we groan, longing to be clothed with our heavenly dwelling, because when we are clothed, we will not be found naked. For while we are in this tent, we groan and are burdened, because we do not wish to be unclothed but to be clothed with our heavenly dwelling.” Twice Paul says that we “groan”. There’s a danger we interpret this as ‘moan’, but that would be wrong. To ‘moan’ is to grumble, be discontented, and miserable. But to ‘groan’ is to yearn for something and to be expectant of one day enjoying it. Our groaning is actually a mark of the Holy Spirit- “as a deposit, guaranteeing what is to come.” (v5) The very best is yet to come, and the Spirit is God’s rock-solid guarantee that we’ll taste that glorious future. We should rightly take good care of our bodies, being wise and godly about eating, drinking, sexual activity, exercise, what we fill our minds with, not self-harming. But we mustn’t lose sight of our future when this body will be no more, as Paul’s just written- “So we fix our eyes not on what is seen, but on what is unseen. For what is seen is temporary, but what is unseen is eternal.” (4:18)

“Therefore we are always confident and know that as long as we are at home in the body, we are away from the Lord. We live by faith, not by sight. We are confident, I say, and would prefer to be away from the body and at home with the Lord.” (v6-8) Paul says that we can be at home in one of two places- either in this body (here) or with the Lord (after death). He knows where he wants to be, and that is with the Lord. He longs for the unseen reality of his heavenly home. Hence, he says that- “We live by faith, not by sight.” He’s prepared to trust what God has promised about the future and not the circumstances of his own life. You might think that such a heavenly focus could make a person disengage with life here, as the saying goes, ‘they’re so heavenly-minded they’re of no earthly use’. But for Paul, it’s the opposite- “So we make it our goal to please him, whether we are at home in the body or away from it.” (v9) It’s our confidence about the future that makes the Christian even more determined to live a Christ-exalting life today. In fact, the more heavenly-minded we are, the more earthly good we’ll be. As CS Lewis put it- “If you read history, you will find that the Christians who did the most for the present world were just those who thought most of the next.” Paul then gives the reason why- “For (because) we must all appear before the judgment seat of Christ, that each one may receive what is due to him for the things done while in the body, whether good or bad.” (v10) Everyone will come before the Lord Jesus as judge at the end of time. The person who has rejected him in this life will be condemned and face the penalty for their own sins in an eternity shut out of God’s presence in Hell. But the person who has put their trust in Christ in this life, will also be judged. But this judgment is not about salvation, but rather an evaluation of their life. What have they done with the life that God has given them? My first job after university was as an auditor for an accountancy firm. When a client knew that the auditors were coming, they would make sure that the financial records were all in good order, because a clean audit report was great news. If I am a Christian, I need to know that one day Jesus is going to return and I’m going to appear before him and the record books of my life will be opened for his inspection. What have I done with the life that Christ so lovingly and graciously redeemed? What am I doing with my time? What am I doing with the talents that he has given me? What am I doing with the treasure that he has entrusted to me? What am I doing with the people in my life?

Dear Lord God- take my life and let it be, consecrated Lord to Thee. Take my moments and my days, let them flow in ceaseless praise. For your glory I pray. Amen